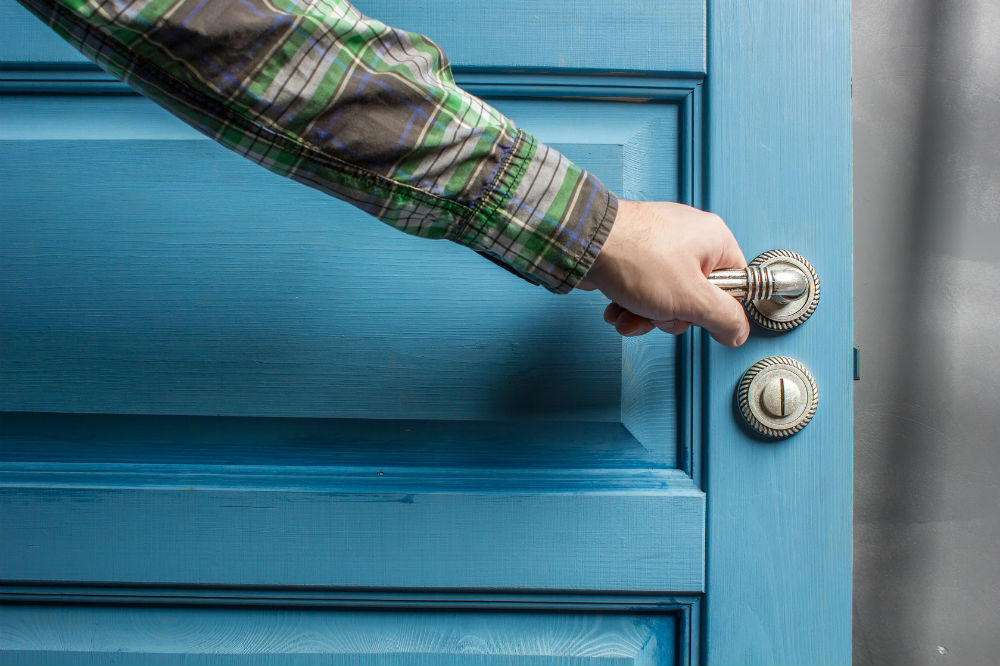 When you hear the name Samsung, monitors, TVs and assorted high-quality electronics come to mind. Door locks aren’t exactly what you’d associate with the brand. Here we have a lock, the SHS-1321 security EZON Keyless, that ought to change your perception of Samsung as a company which provides entertainment and utility to one which also helps take care of your security.

Appearance-wise, when first seeing the lock you’d think that someone glued a Samsung phone to the side of the door. It’s the definition of a modern aesthetic, all black, smooth and very distinctive.

Using it follows a smartphone principle too – you press and hold the panel for a few seconds to activate the interface and are then free to put the code in or tinker with its other settings.

The sequence of numbers can either be put in the standard way, or you can switch to dual security mode. Two random keys need to be pressed first and then the real passkey is added, giving false information to anyone else that might be watching. The keypad emits noises when you’re typing in your code and alerts you when the battery is low. The volume can be lowered or muted if it is annoying.

The door is automatically locked again once you enter, and toggling between manual and automatic mode is done via a small switch located on the inside of the lock.

Another feature which makes Samsung’s lock more convenient and in line with the times is its ability to accept RFID cards. It comes with two of them which work out of the box, but a nifty feature is that you can also set up any other RFID card to gain entry, so your buss pass or a frequently used credit card can act as a key as well.

Full use of this feature is achieved when the lock is set to dual authentication mode, where both a valid passkey and RFID card need to be present in order for the door to open.

Speaking of keys, this is a truly keyless lock in the sense that there are no physical keys or keyholes on it as backup. While this means that you’ll have to pay closer attention to its battery’s status, it adds another protection layer as picking a standard lock is frightfully easy to do.

While the lock has no trouble dealing with both very high and very low temperatures, it isn’t waterproof, meaning that it will need to be either covered by something or under a porch if you plan on setting it up somewhere outdoors.

While setting up the passcodes as well as physically installing this lock can be figured out fairly easily, there’s still the matter of a lackluster manual that accompanies it. An in-depth physical manual comes in Chinese and Korean, while the English instructions are vaguer and harder to follow. Luckily, there are resources online that mitigate this.

Another more serious drawback to this lock is that fact that, because of the way the back of the lock is installed, its less secure if installed on in-swinging doors. Also, the lock isn’t certified to work with all standard sizes for American doors, so you may find yourself not being able to use it at all.

If you do your research and have a door which can accommodate it, Samsung’s keyless lock is a solid modern security lock that does a fine job of keeping anyone from breaking into a space you wish to protect, or not giving them a chance to get away without sounding the alarm.

It looks cool and delicate while being sturdy enough to withstand a beating. The added convenience of using something like a student ID to open it and the frustration would-be burglars will have when they see that there’s no physical lock to pick only add to the SHS-1321 security EZON Keyless’ appeal.

If the kinks are ironed out by the time its next iteration comes out, Samsung might very well start to gain more recognition and respect in the world of security which it is used to getting in other areas.