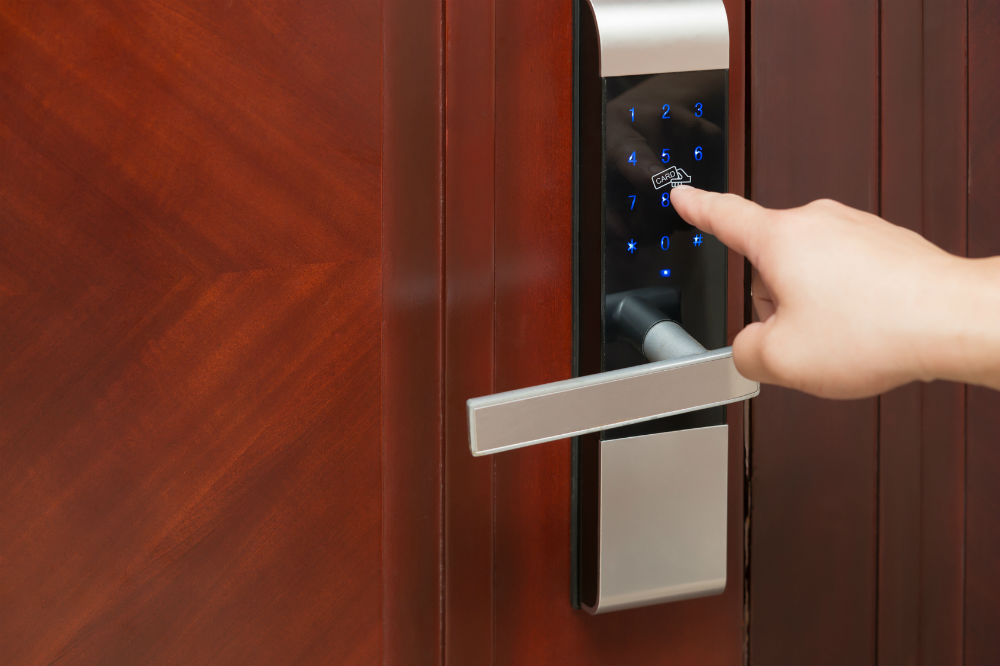 How many times have you updated your personal computer, TV or cellphone in the last decade or so? Multiple times is probably an accurate guess. And how about the locks which keep your home or business secure? Updating those is rarely on people’s minds, unless there’s a reason to do so after the fact.

Many people are unaware that locks have been keeping up with the times as well and that keyless variants exists which are as secure if not more so, and are without a doubt much handier and more versatile than tumbler locks ever were.

A standard lock is limited in its functionality by the physical presence of a key and a person that needs to operate it. Keyless locks on the other hand can be operated from afar, set to automatically lock the door when closed, operate on a timer when required, and let only specific individuals through based on their unique traits rather than on whether or not they happen to be holding a piece of metal.

As with any booming market, the trouble in assessing which keyless door locks are worth your time is becoming increasingly harder. Many established lock manufacturers, as well as companies more recognizable in other areas, are getting into the game, and there are already hundreds of locks to choose from, some of which are blatant inferior copies of one another.

Actually rounding up so many of them, finding in-depth reviews, and comparing them effectively, is time-consuming. This guide was created in order to both educate you on the elements a good keyless door lock needs to have to even be considered, and to give an overview of some of the best examples you can purchase today and get an update for any space whose security is important to you.

These are the two main reasons to switch to a keyless lock in the first place. Misplacing your keys or having them stolen becomes a moot point with this type of lock as all you need to do is either memorize a number or place your finger onto its sensor to go on through.

Often these locks employ sophisticated security measures like decoy passwords, dual passwords and the simultaneous use of two or more ways of entry to keep an unwanted person out, even if they happen to have memorized your code.

While the technology behind gaining access to a keyless lock is vastly superior to older, analog ones, the principle with which they operate has changed little. Here, the same rules still apply – locks that come with sturdy latches or bolts as well as heavy-duty strike plates stand a much better chance against forced entry than their flimsier counterparts. Another aspect of durability is a keyless lock’s ability to withstand a wide range of temperatures as well as the elements if it’s to be used out in the open.

An appearance that’s up to date

Don’t underestimate the power that a well-designed keyless lock has in both transforming your living or office space and causing someone to think twice before attempting a break-in. Our houses are jam-packed with innovative gadgets and a modern style tends to follow their sleek and simplistic appearance.

While most parts of your home can be given a makeover to match, old-fashioned locks also tend to have an equally outdated look that can clash with the rest of the ensemble. Keyless locks tend to look more contemporary and massive, signaling that the space they lead to is clearly off limits in a no-nonsense kind of way.

Now that you know what’s expected of a top-notch keyless lock, it’s time to look at five great examples. Whether it’s style coupled with security, a fast response time, or peerless resistance to wear and tear, each of these excels at some aspects of what makes keyless locks so appealing.

The first lock on the list also happens to be the only one shaped like a doorknob. Its advantage is hassle-free installation regardless of which side the hinges are and the fact that you can stack the room behind it full of items without fear of losing the knob’s functionality.

It stores eight different codes and a master code that’s used to change them and put the lock into and out of passage mode. With its stainless steel finish and round shape, visually it’s a throwback to simpler times, but with unmistakable updates that make it more formidable. It’s also the most affordable lock on the list, so if you’re in need of multiple ones and don’t want to break the bank, it ought to be even more appealing.

Next up is a decidedly stylish and secure lock from Schlage. If the elegant design and color schemes don’t persuade you to get one, its accessible keys, intuitive code management, and the fact that it is both weather- and temperature-resistant, should.

Along with a smooth and secure feel, you get the option of using a standard key alongside the keypad as an alternative for members of the family who might not want to adapt to a new way of doing things.  Useful as both a security measure and a conversation piece, it’s a lock which provides a reasonable number of features for an equally reasonable price.

As the price point of your chosen lock increases, so does the number and complexity of features it has. With four varied entry methods, literally hundreds of users you can add or remove, helpful voice navigation and a no-nonsense, hefty look, the digital door lock by Haifuan projects an air of protection your coworkers will appreciate and shady characters will be wary of.

While its large storage capacity and overall appearance do make it feel most at home in an office building, the lock’s extensive security features ought to make home owners sleep more easily as well. With only situational drawbacks and the potential to keep you safe a good long while, Haifuan’s lock receives a definite recommendation.

Along with the newest Galaxy model and smart TV, now you can own a Samsung digital lock as well. Don’t mistake its pristine and sleek appearance for flimsiness or a lack of security options. As far as controlling door access goes, it is the most nuanced door lock on review, able to automatically lock it from the inside or out, trigger an alarm when opened from either side, and more.

In true innovative fashion, it uses codes as well as RFID cards and is fully operated by a touchscreen whose color and gloss will hold up even under harsh sunlight and is not easy to scratch. True smart capabilities would have been a nice feature, but even so, Samsung’s lock is a worthy, secure upgrade from your old tumble lock.

Lastly, we have a truly high-tech keyless lock manufactured by Ardwolf. While it is the priciest lock in this guide, it’s practically a bargain when compared to other models with similar biometric features as its performance is on par with most of them. While you can still use a key or an eight-digit code to get to whatever it is guarding, fingerprints present themselves as a safer and even more convenient option.

Like Haifuan’s model, this lock will prove to be most useful in an environment where strict access is crucial, even more so since it provides a record of the fingerprints and codes which opened it that stretches far back into the past. If you’re looking for a keyless door lock with a truly refined method of access which won’t set you back considerably, Ardwolf’s A20 presents itself as a safe and logical option.

At a glance, picking out the best keyless door lock might seem intimidating. There are only five top picks showcased here and each has something going for it the others, and others commonly found on the market, lack. Luckily, most of these “limitations” have to do with either style preferences like the case of handle vs door knob, or the amount of different codes that can be stored in the lock at any given time.

What’s more important are the locks’ clear advantages over standard ones. No longer constrained by a key, its current location and the fear that a copy of it might exist which you don’t know about, going keyless presents itself as a natural step in the evolution of home and business security.

The trend is bound to expand even more, but with good, viable alternatives here for the taking, why not embrace it? Chances are that after you’ve been using a keyless lock for a little while, you’ll wonder how on earth you ever lived without it.